We woke up in the parking lot of our frien apartment and felt like bums. Why we decided to sleep in our truck instead of the fouton of her place I’m not sure. But I am sure that it was a mistake. Heat and bright street lights don’t make for a very good night’s sleep. Luckily for us though, showers were waiting inside and we had a very exciting day planned! We were headed to a secret place to camp and fish the Missouri River. Jake was more excited than me though for some reason I don’t know why. We picked up some groceries and a very unhealthy Sonic breakfast, which we later regretted, on our way out of town and were headed to our destination at about 8. Jake was like a little boy on Christmas and I was a bit of a zombie. We arrived at our campsite at about 10:30. It wasn’t fancy, but inexpensive and had everything we needed! Jake hopped out, grabbed his gear and was off. My sleepy self napped under the big beauitful trees we were lucky enough to have at our site. His first outing was very successful, the fish were big and beautiful and the weather was perfect.

He returned from fishing at about 1 and we decided to check out the lake on the other side of the dam. We found a nice picnic table to make lunch, and then found a patch of grass to lay down in. I would have taken pictures of our tuna sandwiches but Jake is slowly losing his patience with all the picture taking. “Its for he blog!” is a phrase I’ve used only about 100 times. Though we struggle to come to an agreement of how many pictures are taken in one day, he does keep me balanced and for that I’m grateful. Otherwise there would thousands and I would never stop to smell the roses sitting alive in front of me. Okay back to the patch of grass. He napped while I read for a bit. Then I fell asleep too. It was a nice day recreational area and campground, but we liked our place more. Less people and more fishing. We returned back to the campground at about 4 and Jake went out for another successful round. He was having an okay time. 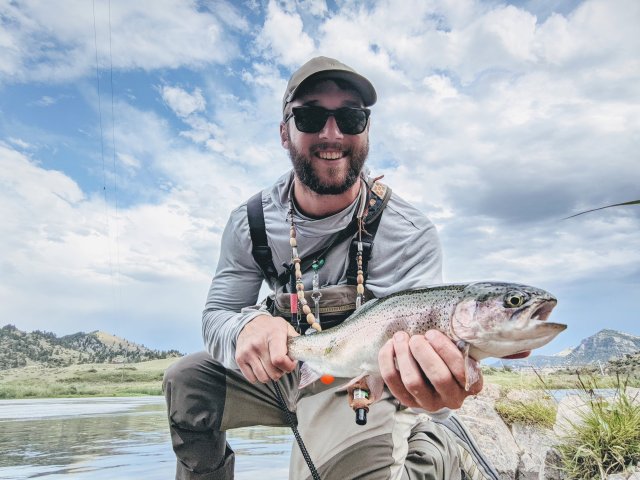 He returned at about 6:30 and I proposed we make breakfast for dinner. Our neighbors had made bacon and eggs and the smell got me thinking of what we could make with the food we had. Jake approved. We made a college favorite. Potatoes O’Brien egg skillet with Maple sausage with our Canadian maple syrup we purchased earlier on the trip. We were very pleased with our decision.

We ended the evening with one final outing. This time, I tagged along in hopes of catching one. No luck for me but I did get to practice. We ventured up into the canyon. On the way there we were talking about all the wildlife we had seen and how lucky we were. The only thing we hadn’t seen were Elk. Well…ask and you shall receive! Driving back to camp we were blessed to witness a heard of about 50 grazing in a field. The picture doesn’t due it justice. Thank you, God!

A woman on a mission to share a love of adventure and freedom. View more posts